The current subject for Nancy Merrill’s A Photo A Week Challenge is Boats and Ships.  My earliest recollection of boats comes from when I was a small child and we went on a sightseeing trip down the river Thames in London.  Since then my water-going experiences have been limited to a ferry-crossing to Mackinac Island, the occasional trip down the Chicago river, a couple of outings with the Des Plaines Yacht Club on Lake Opeka, and one or two other sightseeing excursions on rivers and lakes.  I’ve never been on an ocean liner or cruise ship so I don’t know whether sea sickness would be a problem and since I’m never likely to find out, it will forever remain a question unanswered.

A ship and a boat at The Tall Ships Festival at Navy Pier in Chicago.

A boat docked in Sturgeon Bay, Door County in Wisconsin.

A sightseeing boat passing through the lock at Sault Ste Marie, Michigan. 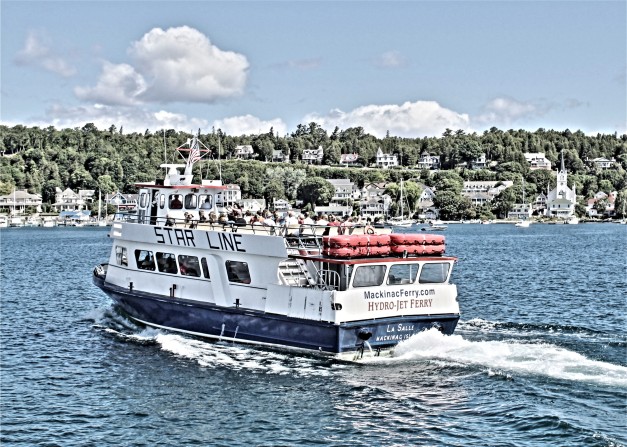 A ferry boat crossing over to Mackinac Island.

Competitors with the Des Plaines Yacht Club in a race on Lake Opeka.

Sightseeing boats making their way up the Chicago River.

12 comments on “A Photo A Week Challenge – Boats & Ships”