The Weekly Photo Challenge on The Daily Post this week is Motion and for this theme I’ve decided once again to use b/w images in order to put more emphasis on the topic rather than the colors. I’ve also tried to show just enough blur in the pictures to demonstrate motion without having the subject totally unrecognizable.

How I miss competing in this sport but advancing years, the loss of most of my fencing equipment in a flood and various medical issues have me thinking that this kind of motion is no longer in my picture. Now I can only stand on the sidelines at capture the moment on camera. 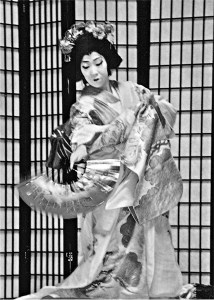 A little bit of fan-twirling going on here as one of the performers at the Japan Festival in Arlington Heights goes through the motions of a very graceful dance.

Continuing with the twirling theme, dancers with Ballet Folklorico throw all their energies into the performance; definitely motion with emotion.

Horses in full motion, racing for the finish line at Arlington Park. 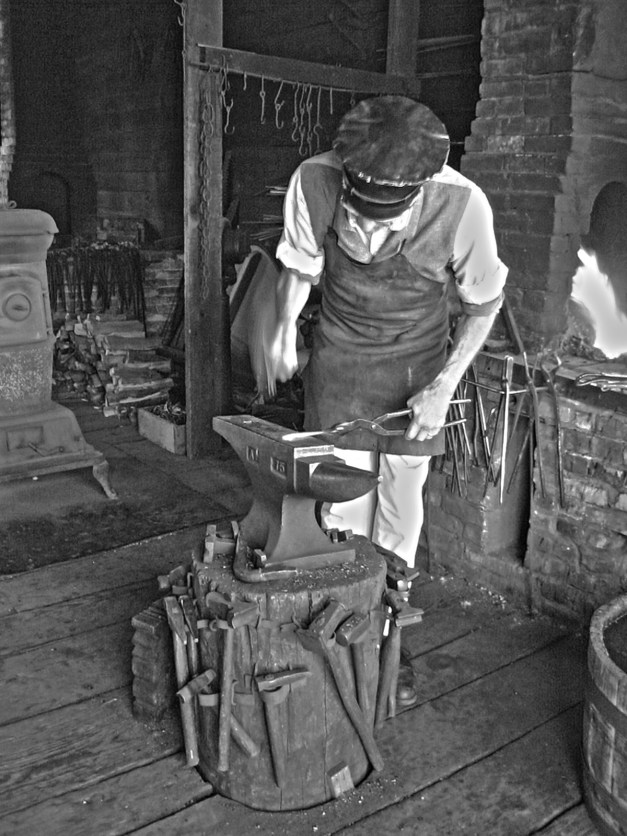 A blacksmith working at his anvil in Old World Wisconsin.

For more on the Weekly Photo Challenge go to https://dailypost.wordpress.com/dp_photo_challenge/motion/

Frizztext’s A-Z Challenge this week on Flickr Comments at http://flickrcomments.wordpress.com/2014/02/11/tagged-f-2/ is the letter F.

My fencing career was short and sweet!

For reasons best known only to myself, I didn’t take up fencing until I was 56 years old and as a result my family thought I’d gone absolutely mad. I’d never done any kind of sport before (I always hated gym in school) and this was so utterly unlike anything I’d ever attempted in the past that even I wondered, sometimes, if I hadn’t taken leave of my senses.

I signed up for classes at the local park district and bought all the gear. I had no idea how expensive fencing equipment would be until I started writing checks for mask, uniform, chest protectors, electric body cords, gloves, shoes, equipment bag and, last but not least, several weapons. Once I’d paid for all that lot I was determined to get my money’s worth, come hell or high water!

Then I found out just how out-of-shape I was!

The picture above shows a couple of the younger fencers who had already progressed to higher things. The classes that I took were for adults but I was easily the oldest there. After limbering up and stretching out, our instructor had us doing footwork for most of the class time and did I ache the next day! It wasn’t until some weeks later that we actually got to do bladework by which time I was really starting to enjoy the exercise without feeling like a beached whale.

I re-took the beginners class several times until I felt fairly confident that I could hold my own and after a while I joined the local fencing club. My goal was to enter a tournament, so I took as much practice as I could and finally got up the nerve to try my luck.

I’d never realized just how grueling the real thing is! I remember thinking “Please God let me live till the end of this bout!” Of course, I soon got knocked out in the elimination round but I was rather pleased with myself that I hadn’t actually passed out on the floor. After that I entered more tournaments and gradually went through a succession of “Please let me score a point. Please let me win this bout. How about letting me win this event,” until I ended up with one or two medals, more by luck than skill I might add. That’s me on the left, in action. 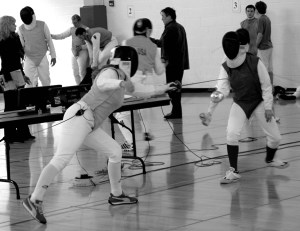 I even qualified for Nationals one year but by that time my health was starting to let me down and because of that and other personal reasons I didn’t make the trip. Treatment for blood clots in both lungs and leg meant I couldn’t do anything that involved cuts or contusions and, take my word for it, my fencing career was heavily marked by a series of welts and bruises! Don’t let anyone tell you it’s a ‘gentleman’s sport.’ It’s not! There were times when I got home from an evening of fencing when my body looked like I’d been hit by an express train. But at least I hope I gave as good as I got on the odd occasion.

Pictured above are two, more experienced club members who were very tolerant of my ineptitude and during the few years that I was there, tried to teach me some skills that would help me to avoid taking so many hits, but I guess that saying about ‘you can’t teach an old dog new tricks’ is partially true. As much as I tried, I knew I would never be able to reach their standards.

After I left the sport I really missed fencing. I did return for a brief stint when I was 60, just to prove to myself that I was still up for it but the reprise was short-lived. There have been times since when I’ve been tempted to go back, but foot surgery, elbow tendinitis and finally a flood that ruined almost all my fencing equipment left me feeling like someone was trying to tell me something.

Still, I sometimes like to imagine that I could, even now, go through the motions; en garde, parry, lunge, riposte, balestra, fleche and touche! Olympics here I come!!