After all the health issues that we’ve faced so far this year, my husband’s knee replacement surgery being the latest, I was overjoyed to finally have something to celebrate when our eldest grandson and his lovely young bride were married last week.  It’s not often that the family has an opportunity to get together, now that they are all moving further afield with jobs that demand so much of everyone’s time, so we made the most of every moment.  And if you have read this far, I sincerely hope that, if you haven’t already done so, you will follow this link Happy 21st Birthday Grandson! to see why I was so happy to share this wonderful day with the bride and groom.

And in response to Michelle Weber’s Weekly Photo Challenge here is a collage of images that I was able to capture when I wasn’t dancing, talking and generally having a marvelous time. 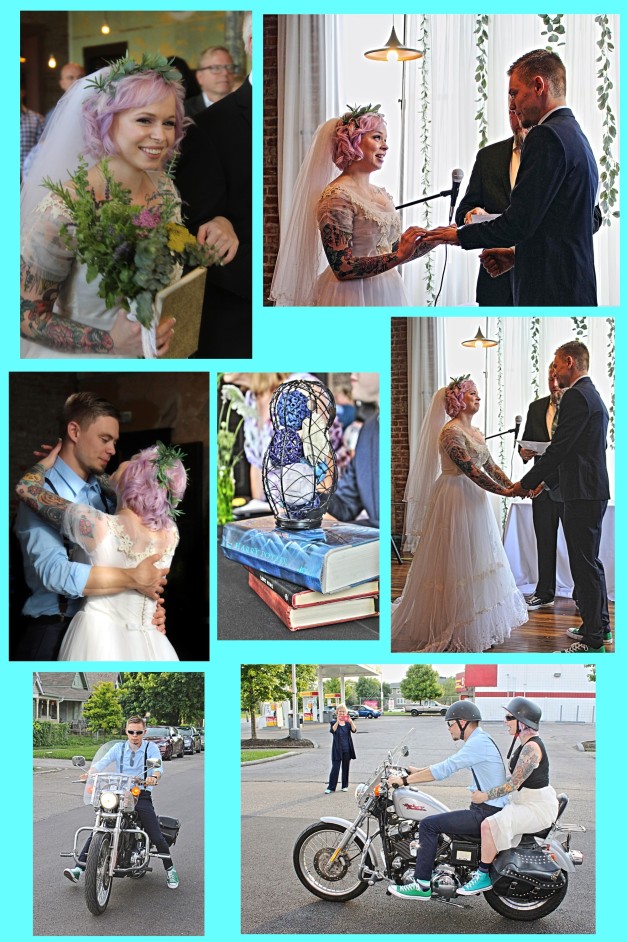 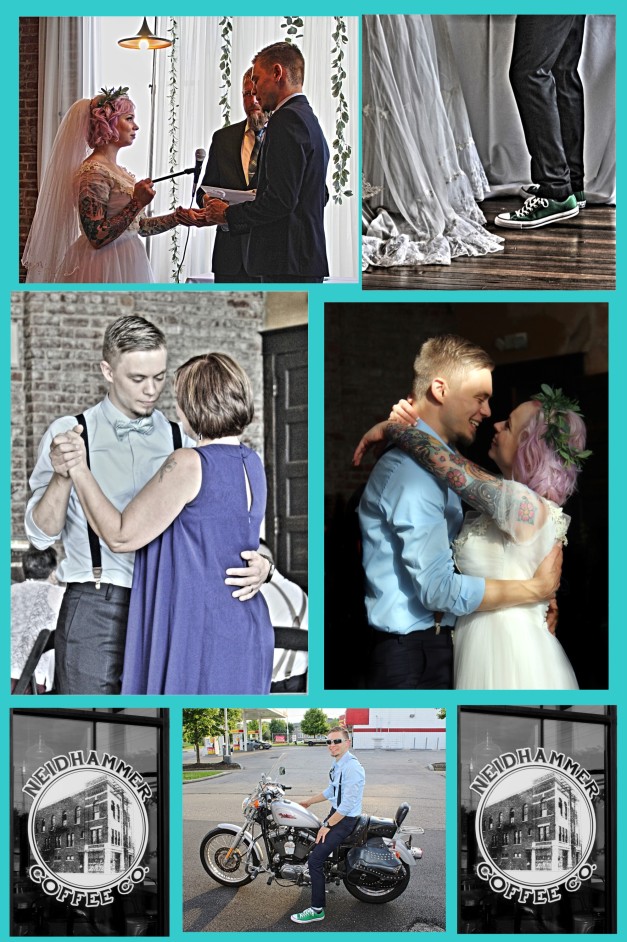 This week Cee gave us the choice of houses or barns for the Fun Foto Challenge and although I have several pictures of barns, houses won the day and here’s why.  Very often, when we go on our travels around the ‘burbs and further afield, we like to visit old houses.  Sometimes we’re able to take a tour inside, other times we just gaze at them from afar.  Many of these houses have been acquired by local historical societies, while some remain privately owned. Sometimes there are admission fees, ranging from just a couple of dollars to large amounts which, in the case of the Biltmore Estate, have been well worth the expenditure.  Here are just a few of those houses.

The Cuneo Mansion in Vernon Hills, Illinois, once owned by Samuel Insull, the original founder of the General Electric Company and later purchased by John Cuneo Sr, owner of Hawthorne Mellody Farms Dairy, the National Tea Company and the Cuneo Press, was gifted to Loyola University Chicago in 2009.  Although we never took a tour of the house, Mum and I visited the estate several times just to walk around the gardens. 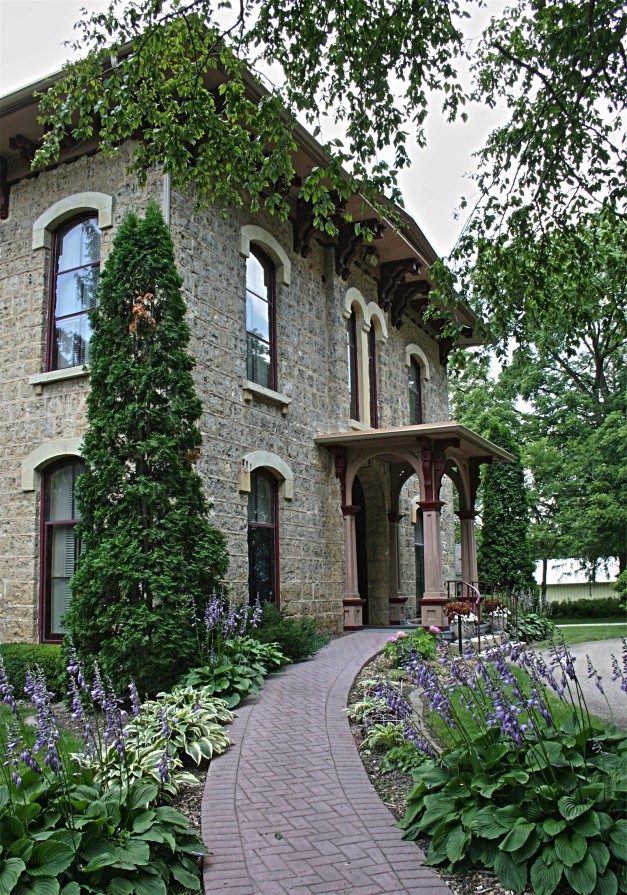 The Taylor House in Freeport, Illinois is home to the Stephenson County Historical Society.  Built for lawyer and banker Oscar Taylor in 1857, it was opened as a museum in 1944. The house served as a ‘station’ for the Underground Railroad during the Civil War when fugitive slaves were hidden in the basement behind a secret door, and is on the National Register of Historic Places. 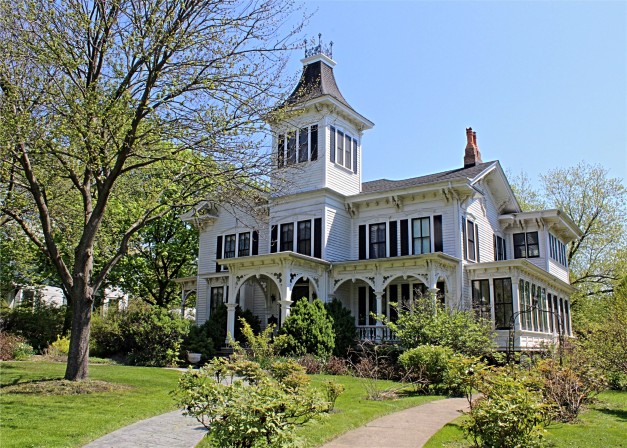 Known as The Little Orphan Annie House in Lombard, Illinois, this house was once home to the parents of Harold Gray the originator of the Little Orphan Annie cartoon strip.  Gray worked in a studio there until he moved to the east coast.  The house was originally built for Dr. William Leroy, who specialized in making artificial limbs for Civil War veterans, in 1881.  As far as I know it’s not open to the public and we just stood and looked at it longingly from the sidewalk. 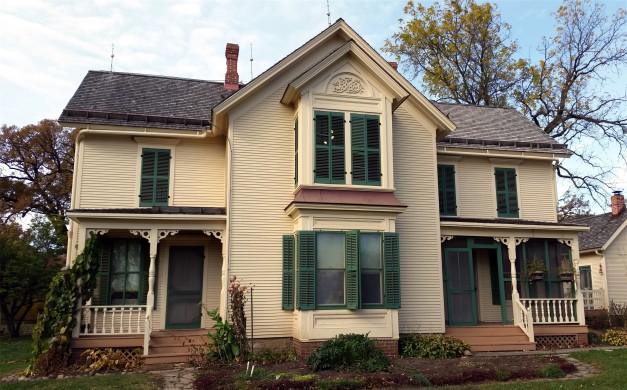 The house at Kline Creek Farm in West Chicago, DuPage County, is open to the public and historically-costumed interpreters present topics from baking in the kitchen to quilting and spring cleaning while giving tours of the farmstead.

Our most recent visit to a house with a rather murky past was in Duluth, Minnesota.  Glensheen offers several different types of tours varying in price and we opted for the ‘Classic’ one-hour, three-floor one. It’s always interesting to see how the wealthy lived and, after reading something about its history, I was curious to take a peek inside this house that was built in 1908 for the family of Chester and Clara Congdon.  According to Congdon’s will, his youngest daughter Elisabeth was allowed to live at Glensheen until her death. In 1977, an aging and frail Elisabeth, along with her nurse, were murdered here.  The husband of Elisabeth’s adopted daughter, Marjorie, was convicted of the crime. Marjorie was accused of aiding and abetting and conspiracy to commit murder but was acquitted of all charges. The estate was eventually given to the University of Minnesota Duluth.

It will take you more than one day to fully explore the house and grounds at the Biltmore Estate in Asheville, North Carolina. I can understand why the Vanderbilt’s visitors never wanted to leave. What luxury!  Members of the Vanderbilt family still live here and have turned the estate into a flourishing business.

Some time ago we took a tour of the Oldfields-Lilley House and Gardens in Indianapolis. The weather was rather wet and gloomy and we didn’t really get to see the outside at its best so this is definitely somewhere I’d like to re-visit. Built in 1910, Oldfields was eventually given to the Art Association of Indianapolis and this National Historic Landmark is now a museum.

One of the many picturesque houses on Mackinac Island. No house tours on this trip but just fun looking at all the different styles and taking pictures.

For more on Cee’s Fun Foto Challenge go to https://ceenphotography.com/2016/10/25/cees-fun-foto-challenge-houses-andor-barns/

The subject for this week’s Photo Challenge set by Nancy at The Daily Post is Shine.  Looking through the photo files I came across these three images that I thought might work.  The first, a brilliant cut-glass bowl, was on display at the Indianapolis Museum of Art.  The second was the result of an experiment with some glass marbles (too much time on my hands) and the third was a Christmas window at Macy’s (or possibly it was still Marshall Fields in those days) in downtown Chicago.  For more on The Weekly Photo Challenge at The Daily Post go to https://dailypost.wordpress.com/photo-challenges/shine/ 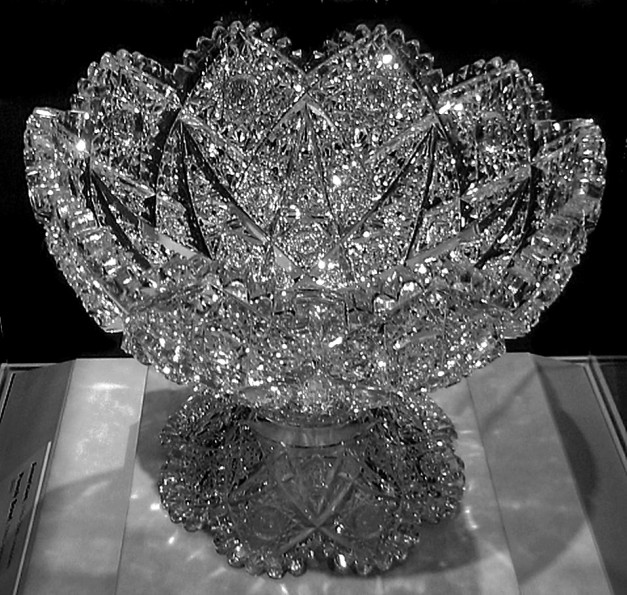 Ailsa’s Travel Theme challenge this week is Center.  Here is my interpretation of the theme. 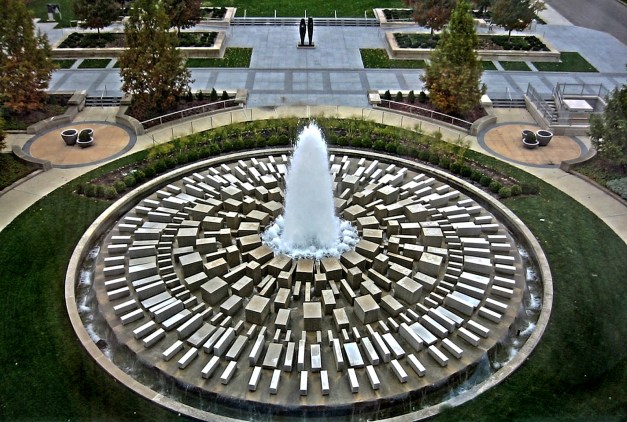 Looking down at the center of the Sutphin Fountain at the Indianapolis Art Museum in Indiana. 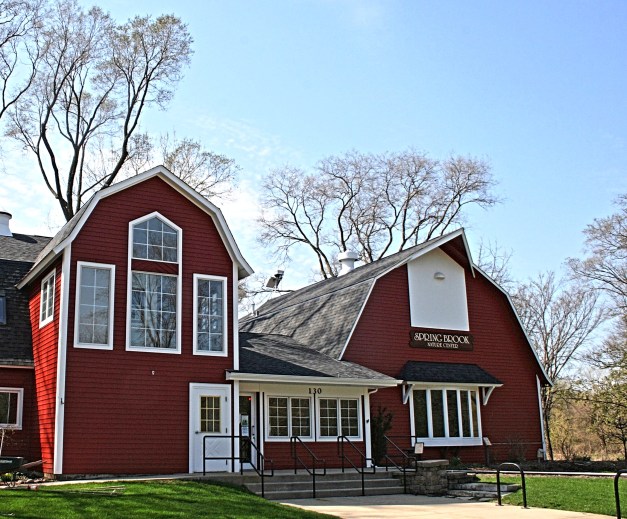 For more on Ailsa’s Travel Theme challenge on Where’s My Backpack? go to http://wheresmybackpack.com/2015/04/17/travel-theme-centre/

There may be larger buildings, fountains and monuments in the world but these are some of the largest that I’ve seen. 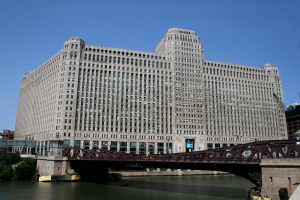 When it opened in 1930 The Merchandise Mart in downtown Chicago was said to be the largest building in the world. With 4,000,000 square feet of floor space, The Mart was so large that up until 2008 it even had its own postal ZIP code.

The Ferris Wheel on Navy Pier in Chicago is 150 feet tall and has 40 gondolas seating up to six passengers. It was modeled after the fist Ferris wheel constructed for Chicago’s 1893 World Columbian Exposition where it was the largest attraction standing some 264 feet tall. 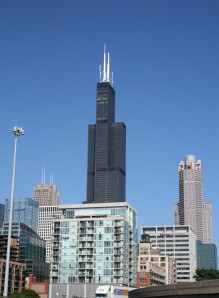 Sears Tower, or Willis Tower as it is now called, was once the tallest building in the world, reaching 1,451 feet into the sky. It no longer holds that distinction and is now only the eighth tallest but it still looms large over the Chicago skyline. 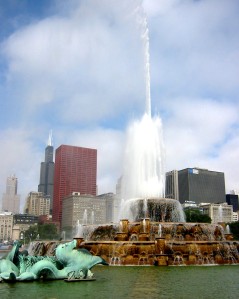 Buckingham Fountain in Grant Park is still one of the largest fountains in the world. Dedicated in 1927, the fountain is in operation from mid-April to mid-October and draws many visitors. After dusk the water shows, which occur every hour on the hour, are choreographed with lights and music.

The Soldiers’ and Sailors’ Monument in downtown Indianapolis towers 284 feet over Monument Circle. There is an observation deck at the top of the monument which you can reach by climbing 331 steps or paying $2 to ride in the elevator.

Ailsa’s Travel Theme challenge this week on Where’s My Backpack? at http://wheresmybackpack.com/2014/02/07/travel-theme-yellow/ is Yellow.

Looking up at some glass artwork by Dale Chihuly on display at the Visitors Center in Columbus, Indiana. 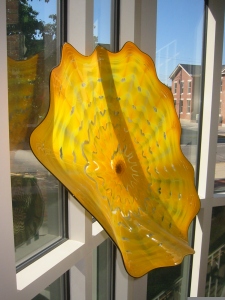 A closer view of the artwork at the Visitors Center in Columbus.

Artwork on display in The Smith Museum of Stained Glass Windows at Navy Pier in Chicago.

This yellow hat seemed like a natural attraction for the butterflies at Brookfield Zoo.

A fancy yellow motorbike with helmet to match, parked in Fountain Square, Indianapolis. 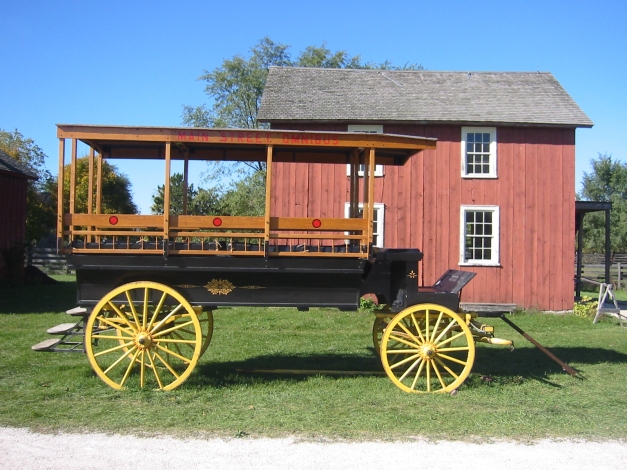 Wow! Once I got started on this one I couldn’t stop. I didn’t realize that I’d taken so many pictures of wheels! The first shot was taken at a farm in Old World Wisconsin.

Some fancy wheels on a car at the Volo Auto Museum.

White wheels on a carriage waiting to be hired in downtown Indianapolis. 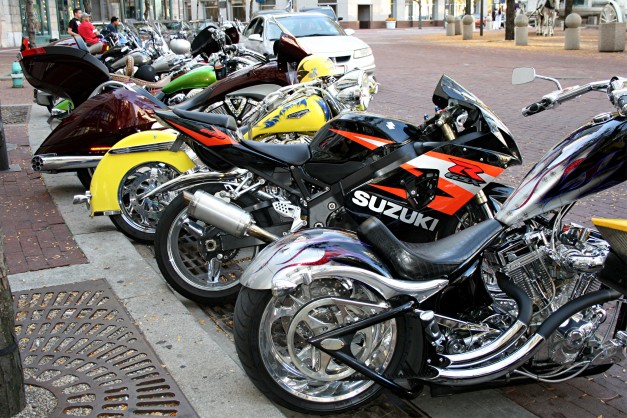 Just across the road from the horse and carriage at Monument Circle in the center of Indianapolis were some more modern wheels parked outside a café.

Also at Spring Valley, a wagon with bright, red wheels in a barn at the Volkening Heritage Farm.

Ailsa’s Travel Theme challenge this week on Where’s My Backpack at http://wheresmybackpack.com/2013/09/13/travel-theme-multicoloured/ is Multicolored 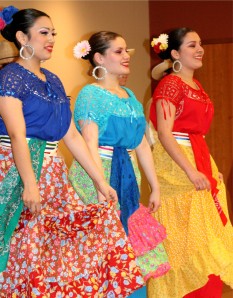 These lovely young ladies in their multicolored costumes were performing with the Ballet Folklorico in Elgin when I took this picture.

This totem pole is part of an exhibit at the Field Museum in Chicago. 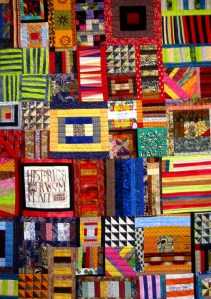 The beautiful quilt pictured above was on display at the Indianapolis Museum of Art.

Exquisitely colored costumes for sale on a market stall.

A delicious-looking Christmas wreath on display at the Chicago Botanic Garden. 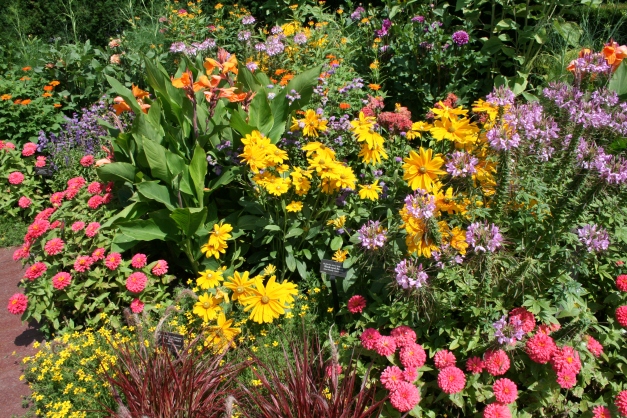 And last but by no means least, a colorful flower bed in the Circle Garden at the Chicago Botanic Garden.